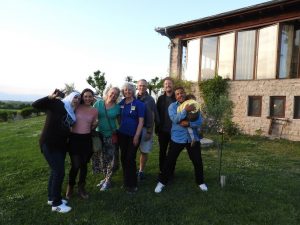 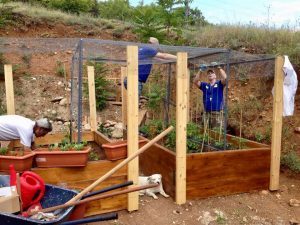 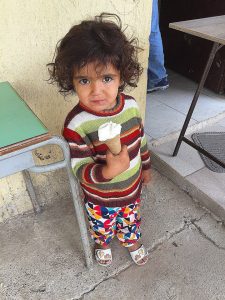 Cotuit Solar is so much more than a solar installation company. We are a small group of hardworking individuals who love what we do, because we love helping. We find providing solar helps our planet, but we also care about helping our community and those in need. We are proud to have a helper like Steve Schrader on the Cotuit Solar Team. Read his incredible story below:

My wife, Diane, and I recently volunteered for three weeks at a Syrian refugee camp in Northern Greece. The refugee camp was near a town called Veria where St Paul had preached in his early efforts to convert the Gentiles.

We worked with a wonderful group called Bridge2 (www.bridge2.gg). Bridge2 operates a small grocery store, a clothes shop, and a shoe shop that supplements the meager items provided them by the Greek government. It also provides a room for men to watch sports, a women’s beauty shop, and activities for the kids. All these items or services are supplied at no cost to the residents. Our main goals while working with Bridge2 were to assist as needed and spread kindness.

“We loved the gesture they used to greet you or to show appreciation. It was a slight bow and with a simultaneous right hand movement to the heart. It made us feel like family.”

We will always cherish our time with and remember the big hearted refugees that met us with warm smiles. About 60 families and 20 single men live at the camp. They mostly are from Syria with a few from Iraq and Palestine. The refugee children were fun loving and absolutely adorable. The adults were all very friendly and very appreciative. They were incredibly generous with what little they had. We loved the gesture they used to greet you or to show appreciation. It was a slight bow and with a simultaneous right hand movement to their heart. It made us feel like family.

About half way through the stay, approximately 25 new refugees arrived. They had been on the island of Chios for months before arriving in Veria. They arrived after a 25 hour bus ride with nothing but a suitcase with clothing. It was great to see the camp residents come out in mass to greet the new arrivals. The Bridge2 volunteers met them with a warm welcome and provided a snack. We also gave them a welcome package consisting of food, cooking utensils, and other basic household items like shampoo. We then joined the camp’s current residents in helping the new residents move into their rooms.

The rooms are very cramped. The heat goes out in the winter and there is no air conditioning in the summer. The bathrooms and kitchen facilities are all communal. Imagine being in a small dorm room with three or four children for months at a time. Although the new arrivals were happy to be at the camp, you could feel the disappointment as they saw their latest home. We saw several women break down into tears. All we could do was just express our regrets at their situation and offer them a hug. Many of the residents have been in these rooms for a year or more while waiting for approval to relocate to their new home country. While some people might say they should be happy to have anything, it must be remembered it really wasn’t their choice to depart from Syria. They certainly did not ask for this life situation. We have to honestly ask ourselves “How would I feel if it was me?”. And also admit to ourselves that but for the grace of God, it could be.

We met refugees from all different walks of life, a hospital worker, a builder, a farmer, a juice maker, among others. All were driven out of their homes by the terrible and brutal conflict in Syria. They universally told us how beautiful Syria is and how much they longed to return. They told us about how before the war, the Sunni, Shia, and Christians in Syria were all good friends. The refugees had a novel way to indicate a friend was Christian. They would make a sign of the cross while simultaneously saying “my friend, my friend.” Sadly, the one English word they all seemed to know was bomb. They would say “our house bomb, bomb”, “the market bomb, bomb”, “my friend’s daughter gone bomb, bomb” …heartbreaking. We were really impressed by their resilience after such trying experiences. They were enthusiastic about moving forward to a new place and new life. We pray God will guide them and protect them during their journey.

This was our first experience with this kind of volunteering. We could not have had a better experience than working with Bridge2. Its efforts embodied Pope Francis’ words “Let us help each other, all together, to remember that the other is not a statistic or a number. The other has a face. The “you” is always a real presence, a person to take care of.” It was great to see an organization so committed to this and to be a part of it. The benefits to the camp’s residents were readily apparent and their gratitude palpable. Our only regret was that we could not stay longer. We already have plans to go back next year.

Mother Teresa once said “It’s not how much we give, but how much love we put into giving.” So when done lovingly, even the smallest of actions is a beautiful way to assist these displaced people. Those wishing to help can do so in many ways. Keeping the refugees in our prayers and spreading awareness about the refugee crisis are good ways to start. Donating your time or money to Catholic Charities, Bridge2, or any of the many refugee support groups worldwide are other excellent opportunities. If you decide to help out, you can rest assured your gifts will provide much needed assistance to those God has called us loudest to focus our spiritual efforts towards, and that they will be greatly appreciated by these faces so in need of our love.