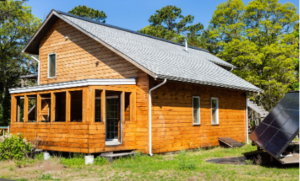 We do more than just solar!

The new Cotuit Solar office received final approval to begin pilot testing an innovative ecotoilet system, the Cotuit Dry Toilet. Approval came from the Massachusetts Department of Environmental Protection, the State Plumbing Board and the Town of Mashpee Building Department.

Rather than mixing human waste with clean water and directing nutrients into the groundwater which pollute nearby water-bodies (as conventional septic systems do), the Cotuit Dry Toilet system is designed to separate and collect urine and humanure to eliminate this source of pollution and allow recycling of valuable nutrients for beneficial reuse as fertilizer products.

Working closely with project partner Conor Lally of the non-profit organization, Nutrient Networks, the pilot will monitor persistence of viral indicators in stored urine under varying conditions to advance understanding of passive pathogen reduction methods. The purpose of this effort is to collect data that will facilitate expanded usage of ecotoilet systems throughout Cape Cod to address the widespread issue of nutrient pollution, water quality degradation and formation of harmful algal blooms. These issues are primarily caused by usage of conventional “title-5” septic systems, which allow harmful nutrients to leach into the groundwater. Retiring such systems and switching to beneficial ecotoilets is a viable and sensible alternative.

The new Cotuit Solar office received final approval 1/28/2020 to begin operation as a pilot urine separating composting toilet site.  The pilot will serve as a study of virus breakdown in stored urine under varying conditions as well as a pilot of the Cotuit Dry Toilet, a self contained urine separating toilet. 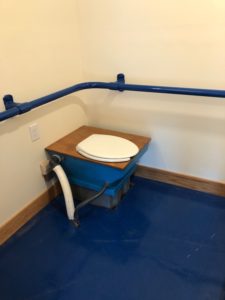 “This effort will contribute to important nutrient management research that will help protect the quality of our streams, lakes and bays”  program co-manager Bryan Horsley said.

For more information about this effort, you can visit the Cotuit Dry Toilet website  as well as Nutrient Networks. As always, feel free to call Cotuit Solar at 508-428-8442 with any questions.